Origami Cake Tutorials will help you make a ganache cake in beautiful patterns using chocolate ganache or buttercream frosting. This cake decorating tutorial is going to give the regular ganache cake a twist

The Origami Cake techniques are perfect for wedding cakes or even a simple birthday. Get inspired by these beautiful patterns and get started with making your own

Below are a few videos which will teach you the origami cake technique using both, chocolate ganache and buttercream. So let's get started with some gun learning

ORIGAMI CAKE TECHNIQUE WITH GANACHE by CAKES BY MK

This method may seem easy but can be quite messy if done in a haste. So, be patient and plan it well. Keep all the items ready before you start the process. And for inspiration, look up these beautiful cakes made by artists from around the world. Their absolutely beautiful and made with ganache and buttercream, both so tasty and loved by all

So, soak in some creative ideas and get started with your Origami cake skills How To Cover A Cake With Chocolate Ganache 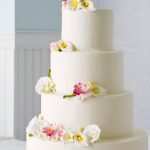